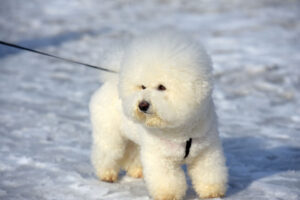 If you’re looking for a cute little puppy that will attract a great deal of attention, the Bichon Frise is one of the best. The Bichon Frise breed is known for its happy-go-lucky, cheerful attitude, bundled into a cuddly little cotton ball. It is a gentle and friendly dog—great with children and always happy to have humans around.

Here is some more info on the Bichon Frise:

Bichon Frises are considered toy dogs, and it may sometimes seem as they’re a stuffed animal come to life, with dark, inquisitive eyes and a plumed tail carried over the back. In French, their name translates as “curly lap dog.”

They were traded by Spanish sailors

Descended from the Water Spaniel and the Standard Poodle, and traded by Spanish sailors centuries ago, eventually the Bichon Frise became beloved in Europe as a popular subject of artwork and a regular role as a circus dog. Today, they’re seen as a companion dog, as they are gentle, yet playful.

It wasn’t until the 1950s that the Bichon Frise arrived in America. In 2001, a Bichon Frise named JR won best-in-show at the world famous Westminster Kennel Club Dog Show.

They are energetic but easy to care for

If you are thinking of adding the pleasures of a Bichon Frise to your own life, know this. They are an energetic and sometimes restless breed, loving activity and enjoying exercise. Since their hair is always growing without shedding, they do require regular grooming every month or two. They are bred to be hypoallergenic, so people with allergies generally do well with them in the house.

Standing about a foot tall and weighing between ten and twenty pounds, Bichon Frise dogs make great family pets, doing well with both adults and kids who are looking for a small, playful dog. For a great selection of small breed dogs in Ashland, Virginia and nationwide, visit the Pauley’s Pups website today.